Fly into Richards bay and start your journey here.

Renting a car is the best way to take in the full experience of seeing South Africa. It gives you freedom and the chance to meet the people We effortlessly picked up our car from Avis at the airport and started our drive to St. Lucia. A World Heritage Site in the iSimangaliso Wetlands.

We stayed at Umlilo Lodge where we enjoyed our very first Braai dinner with our fantastic hosts. A Braai is South African for Barbeque but for some reason a bbq in South Africa is so much better than a bbq at home.

In St. Lucia there is an amazing amount of choices for excursions.

1. Go on safari in the the Hluhluwe & Imfolozi National Park

The oldest Game Reserve in South Africa.  Known for it’s white and black rhino population, Hluhluwe & Imfolozi have the largest in all of Africa! That’s an amazing thing because rhinos are being slaughtered at an astonishing pace. It’s good to see that conservation efforts are being put into effect. But we are worried that it is too little too late.

Rhinos are thriving in Hluhluwe & Imfolozi  but in the rest of South Africa, they are poached at extreme rates

Book your tour with Heritage Tours and Safaris and enjoy a braai lunch while you overlook the valley.

Check out the hippos and crocodiles from the safety of your platoon boat.

Book your tour again with Heritage Tours and Safaris and you’ll enjoy enjoy hot chocolate or cider while the hippos stretch and yawn as the sun sets overhead.

If you are feeling adventurous, skip the platoon boat and kayak in the river instead. Nothing but fibreglass separates you from the crocodiles below. The water in the estuary is an average of 1 metre deep and with 1200 crocs and 900 hippos you can be sure they are lurking below, even if you don’t spot them right away. 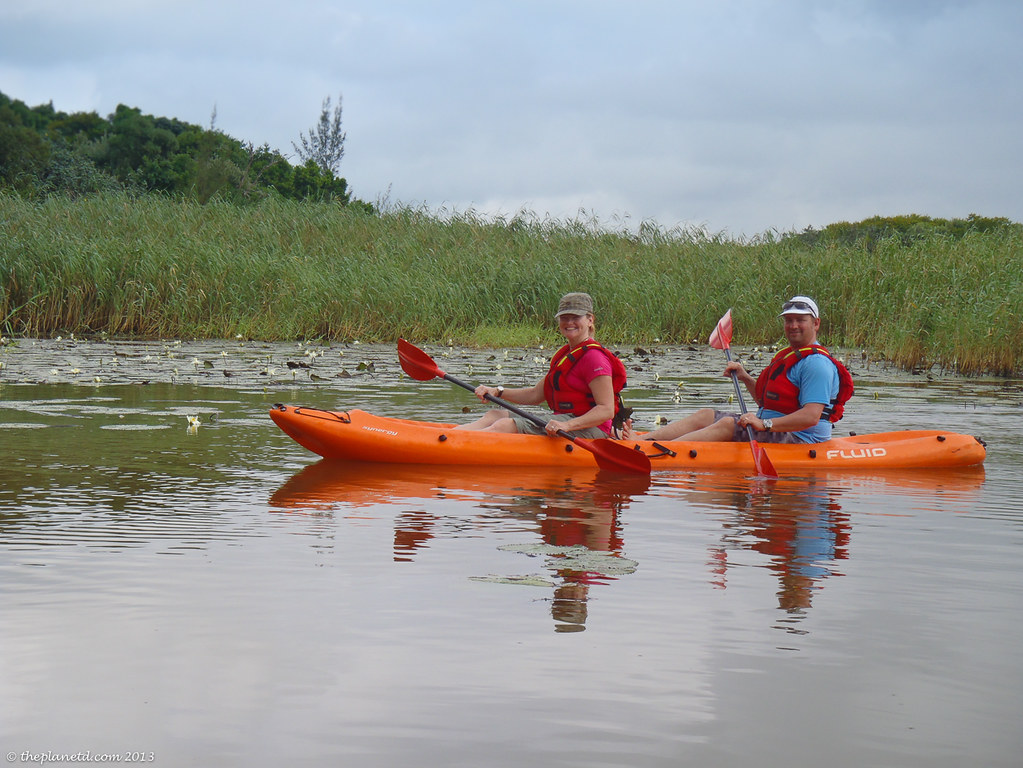 4. Horse Safari in the iSimangaliso Wetlands

Nothing feels quite as awesome as having wildebeest and giraffes run beside you and all around you as you sit atop a horse and look on. You feel at one with nature and get closer to the wildlife than you ever expected! 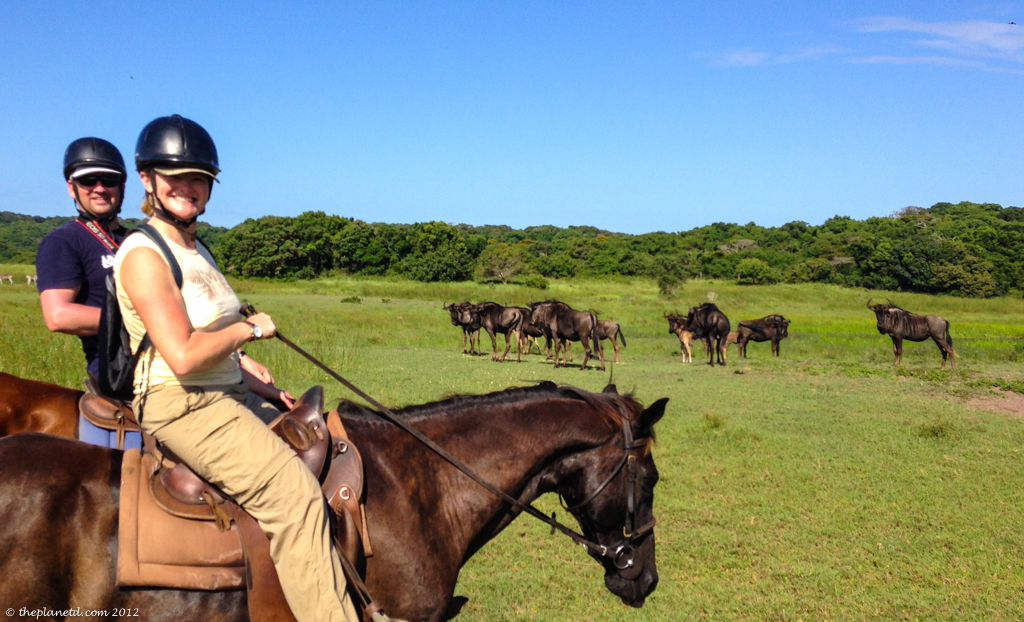 5. See Turtles Lay their Eggs – St. Lucia is one of the best places in the world to spot Leatherback and Loggerhead turtles laying their eggs. Your tour begins and 9:00 pm and goes until the wee hours of the morning. You drive right through the iSimangaliso Wetlands and saw rhinos, hippos and the world’s smallest lizard. Unfortunately we didn’t get to see a turtle hatching, but we did come across many previous nests.

Mother nature was at work tonight as a jackal had dug up a nest of eggs and was feeding on turtles that were about to hatch. They were so close to making it out to sea that they were actually still moving when we came across them. The jackal waited in the dark for us to leave and our guide told us it would be back. Sadly only 1% of newly hatched turtles make it out to sea and it looked very unlikely that any of these would survive.

Durban is only 3 hours from St. Lucia and in this thriving city you can swing from the only stadium swing in the world at Moses Mabidha Stadium. If that is a little too much for you, try a microlight flight over the spectacular coastline. This is the closest you’ll ever come to flying unless you skydive. Feel the wind whip your face as you watch dolphins and sea turtles swim below. If you time it right, you may be there for the whale migration season! We booked our tour with the Ballito Microlight School. 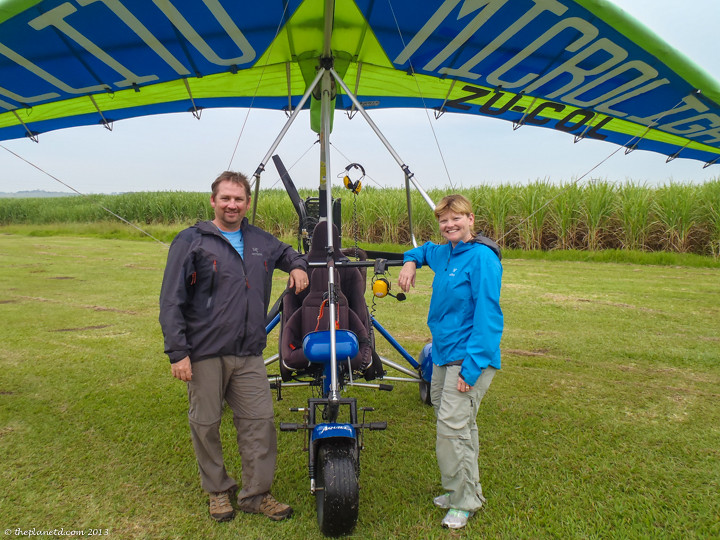 South Africa Canopy Tours has zip lining adventures all around the country. For a beginners zip line adventure, try Tsitsikamma further to the south on the Garden Route. For the Thrill Seekers, stay in Durban and check out Karkloof Canopy Tours. We can 100% say that this was the best canopy tour we’ve ever taken.

Check out more on what a canopy tour is like at Zipadeedoodah, South Africa – and book your own at Karkloof Canopy Tours. Pre-bookings are a must!

While staying in Durban, the historical Oyster Box hotel is spectacular accommodations. Located right on the Indian Ocean in the heart of the bustling town of Umhlanga, you are close enough to all the attractions but quiet enough to enjoy a proper relaxing vacation. With swimming pools, spas, gymnasium, restaurants and cafés, it is a resort to definitely spend time in.

8. Safari on the Garden Route

A person can’t go to South Africa without going on safari. That is unless it is 2008 and you are Dave and Deb. Can you believe we didn’t see the big 5 until 4 years later? In South Africa you have an excellent chance of spotting the big 5 animals while on safari and so much more! Along the Garden Route there are many private lodges to choose from and we stayed at the spectacular Kariega Game Reserve.

It is a luxury reserve with four different lodges. We stayed at the River Lodge. Looking out over the river, we were surrounded by the reserve and wildlife. Our mornings and evenings were spent watching wildlife like Lions, Rhinos, Hippos, Giraffes and elephants while our days were spent in the lovely lodge reading books, sipping wine (all spirits, food and drink are included in the safari package) and relaxing on the dock. We definitely needed more time here.

For more information on the Kariega Game Reserve, visit their website. See our photos of the wildlife we spotted while on safari in South Africa

9. Adventure in the Cango Caves

The Cango Caves are the oldest tourist attraction in South Africa and one of the best cave systems we’ve ever visited. The standard tour is an easy and beautiful walk through massive chambers, but if you are up for the challenge, take the adventure tour. The adventure tour takes you through narrow passageways with openings as small as 26 centimetres. Not for the faint of heart, but great bragging rights after the fact.

It is the zaniest thing we’ve ever done. I mean, who rides an ostrich? But when in South Africa, it is a must. Ostrich are not an endangered animal and if you visit the Cango Ostrich Farm, you’ll learn about how ostriches are raised, what they are used for and you be able to get up close and personal with the largest bird on earth. To ride an ostrich you have to weigh less than 65 kilos, so for the men out there who really want do ride one, go on a diet now! If not, the lady in your life will be able to hop on board and you have an embarrassing video to last a lifetime.

Our Number 1 Choice for things to do in South Africa is Cage Diving with Great White Sharks! We have seen it on Shark Week, we’ve watched it on National Geographic and here we are doing it in South Africa. Anyone can cage dive. You don’t need to be a certified diver, heck you barely even need to know how to swim.

You are in a cage attached to the side of a boat. It’s the easiest diving we’ve ever done, but it is also by far the most exciting. Imagine having a great white shark bump the cage you are standing in. Watch it breach over and over again as it jumps after the fish head used as bait to attract the shark. Sharks are an endangered species and the more people understand the shark and learn to love them rather than fear them, the better off the entire ecosystem will be.

12. Do everything you can in Cape Town

Cape Town is one of those amazing cities where you find yourself saying “I could live here!” It’s beautiful, it’s filled with culture and modern living, it has everything from markets to boutiques and it has adventure. There is paragliding off Lions Head and Abseilling (rappelling) off Table Mountain. Unfortunately we had high winds during our time in Cape Town and both activities were cancelled for three days straight, but it gives us all the more reason to go back! Just because we missed out on jumping off mountains, doesn’t mean we didn’t have fun! We went sandboarding at the dunes and enjoyed the V&A Waterfront to the fullest. There is so much to do in and near Cape Town.

Rent a car and see the Penguins in Simons Town and make sure to visit the famous Cape of Good Hope. If you feel like splurging, make sure to have a meal at the Twelve Apostles.  Better yet, stay there! The Twelve Apostles is repeatedly voted as one of Cape Town’s best hotels. It overlooks the sea and each month they have a delicious wine pairing which we just happened to be there at the right time for!